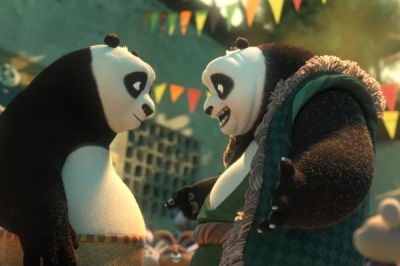 This message was the central theme of this well put together and written story.  Who was Po?  Was he the son of a panda? The son of a goose?  A student? A teacher?

Po had little time to waste because Kai was on his trail and Po needed to figure out how to master his Chi to defeat Kai, but before he could do this, he needed to find himself.

To find out who he was, Po needed to start from the beginning.  So off he went with his biological father, Li to a hidden Panda Village to learn about his roots.  Unbeknownst to Po, his adoptive father, Mr. Ping hid in his sack and ended up being part of the adventure as well.

The training begins with Po learning how to be a Panda.  He starts by sleeping in, rolling down hills and even eating with his hands and not using any chopsticks.  However, lessons on mastering his Chi don’t materialize and soon Po learns that his biological dad never meant to teach him.  Instead, he was trying to keep him away from danger and save him.

But, Danger is Po’s middle name, and he is mad that his dad took him away when the Valley needed him the most.  So Po starts training on his own to beat Kai.  Tigress (the only member that had not been turned into a jade charm by Kai) finds him and tells him that one person cannot defeat Kai.  Po needs an Army, and sure enough, his dads with the help of all the Panda’s in the village step up to be that Army.

Right away he completely understood what Master Chifu was trying to tell him, and that is to be the best version of you, you can be.  So to train the pandas on Kung Fu, Po played to everyone’s strengths.  Truly a master plan!

Of course, they defeat Kai, but Po had to go all the way to the spirit realm to do that.  His saving grace became his family who mastered their Chi and passed on their strength to Po.  Through the transfer of Chi, Po was able to find the better version of him.  The version that Master Oogway had seen in him from the very beginning; the Dragon Warrior!

When Po embodies a golden dragon in the spirit realm, and kicks Kai’s butt and releases all the Chi’s that Kai had imprisoned into jade charms, was my son’s favorite part.  “See this cool dragon thingy?” Po asked Kai when he embodied his real self.

Kung Fu Panda 3 has a great message, and that is to be yourself, whatever that is.  The only way to improve is to become a better version of you and not to copy or try to be like someone else.  That my friends is a lesson that all of us should learn.