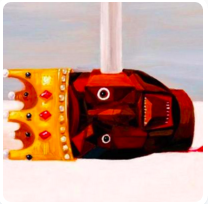 Who can get any work done when there is a twitter feud between Kanye and Wiz?  Not this girl!

There I am minding my own business at work not even looking at my cell phone when long and behold my Twitter feed is blazing!

I remind myself, this is why I follow celebrities!  Yeah, it’s the most current and updated celebrity news by the celebrities themselves!  It can’t get any better!

Kanye unloads on Wiz because of a disagreement with Kanye’s new album ‘Waves’.  Kanye went deep on Wiz and wouldn’t let go.  He even told him that if it weren’t for him, Wiz wouldn’t have a child right now.  It hurt me just to read that.

After like the 20th tweet, Amber had to step in and rescued Wiz because Kanye was on a rampage.  Ms. Rose had to remind Mr. West that sometimes he used to like having his bum-bum played with.  Which, to each its own, but damn, I guess Muva don’t play fair either. 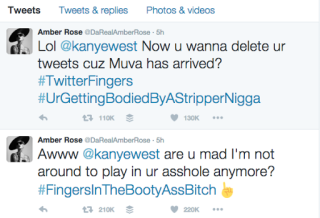 So what did we learn from this?  Don’t throw stones if you live in glass houses.  Both Wiz and Kanye have been with Amber, so for Kanye to try to put Wiz down because he had a kid with the lady, is not very nice.  He should just be grateful he dodge that bullet and continue living it up with the Kardashians.

Wiz shouldn’t be criticizing or throwing jabs at someone who we ALL know makes great music.  This is Kanye’s thing.  He makes great music period.  Accept it, congratulate and move on.  God doesn’t like haters.

It is never classy for a lady to kiss and tell.  Lips should have stayed seal for Amber.  Now everyone is going to be checking under her fingernails.