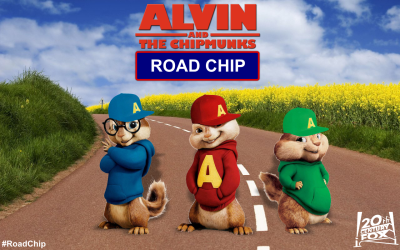 Friday nights are usually movie time in my household.  My son and I celebrate the start of the weekend by checking out one of the new movies that are out in the theater.  This Friday, we watched Alvin and the Chipmunks: The Road Chip.

I was a bit apprehensive about it.  I was hoping that my ‘Poops’ would have decided on Daddy’s Home or Ride Along 2, but long and behold he wanted to see the Chipmunks.  So off we went to see these squirrel look-alikes sing current POP music and dance their tiny mildly chunky bodies to the beat.

I do have to admit, they are super cute and amusing but their voice can be a little annoying.  I am glad to say that as oppose to the previous times, this time, the voice didn’t bother me if anything I found it endearing.

The movie opened to a wild party scene that was DJ by Redfoo and was planned by Barbara from Girlfriends’ Guide to Divorce.  Of course the boys (chipmunks) do not tell their dad; music manager Dave that they are having a birthday party for him because it’s a surprise.

It’s a surprise that is not well taken because Dave does not take kindly to having half the world moving and shaking in his house.  After seeing the boys Twitter accounts with photos of their #crazyparty, he drives home immediately to stop it.  “ALVIN!!!!!” it’s all that Dave has to shout to stop the chanting of the party guests and bring it to a screeching halt.

The boys are grounded and left home with their possible Stepbrother and Stiffler’s mom from American Pie to look in on them from time to time as Dave heads out to Miami with his new and very cute Doctor girlfriend for a work commitment.

Through a series of misunderstandings, the boys think that Dave will be using his business trip to propose to his girlfriend. The creative minds of the chipmunks and their soon-to-be stepbrother decide that is best to stop the engagement from happening.  The kids believe that marriage could mean the separation of the chipmunks from Dave since he would be too distracted with his new family and possible new babies to care for them.  A life in the forest after having lived it big with the humans was enough to prompt the Chipmunks and Stepbrother into action to prevent this engagement.

The road trip or the road chip becomes the best adventure these kids have ever had.  It also becomes a bonding experience for the four of them.  Through adventures across the country from being put on the no-fly list and being chased by an Air Marshall, the kids learn a little bit about the other and grow closer.

But the Chipmunks were exposed once again on Twitter through another #crazyparty in New Orleans.  Dave and his girlfriend, leave immediately to go and pick up the rambunctious crew and bring them to Miami, where they are once again grounded.  The kids are still determined to stop this engagement and Alvin shows just how determined he is by showing the others the engagement ring he had taken out of the box before Dave left the room.

A cry of joy erupts from the Chipmunks as they do their victory dance having stopped the engagement.  But the Stepbrother’s feelings are hurt, he had come to realize that it may not be so bad to become a blended family with these Chipmunks.  Having hurt his feelings, the Chipmunks recognize that they were wrong for taking the ring.  Soon ‘Operation Stop The Engagement’ changes to ‘Operation Engagement’.

But, the engagement was never meant to happen because Dave did not plan to ask his new girlfriend to marry him.  Instead, he was carrying the ring for one of his co-workers so that he could ask his girlfriend to marry him.  Realizing their mistakes all the kids fess up and admit to their plan.  Dave is upset, and his girlfriend is, even more, angry.  Their feelings don’t last long since the kids come up with a grand plan to ask for forgiveness; a show!  The Chipmunks sing and dance their little butts off to the delight of Dave, his girlfriend and all the people there.  Of course, they are forgiven!

On the arrival back to LA, Dave reassures the Chipmunks that he will always be there for them, regardless of who he marries and how blended their family may get.  Dave stops at the courthouse on the way home to make the Chipmunks officially his kids.  The Chipmunks could not believe their luck; Dave had officially become their father.

Not everything is perfect in the Chipmunk household; another surprise is awaiting them, something that Alvin had completely forgotten.  Dave doesn’t like surprises especially not this kind.  Once he sees it, he yells “ALVIN!!!!!”